Fully autonomous weapons (also known as killer robots) would lack the human judgment necessary to evaluate the proportionality of an attack, distinguish civilian from combatant, and abide by other core principles of the laws of war.

Watch the video or read more on why autonomous weapons should be banned.

The Peace Union of Finland is a member of the Campaign to Stop Killer Robots. It is an international coalition of non-governmental organizations (NGOs) that is working to ban fully autonomous weapons and thereby retain meaningful human control over the use of force. 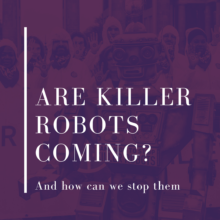 Join the discussion with our guests Laura Nolan and Drank Slijper in Otaniemi on 13 February!